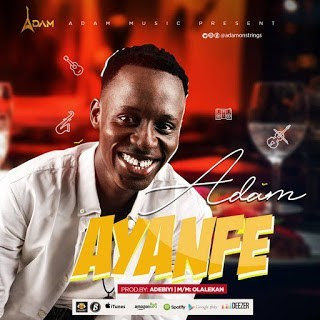 Adam Music Present Front line Artist  Adewale Daramola popularly known as Adam For as long as he can remember, music has been an integral part of Adam’s life.
He started his musical career at a tender age as a percussionist. By age five, he was playing the recorder, akuba, agogo, shakers, clef, samba, etc. to mention but a few. At age 10, he was playing the drumset with dexterity; and by age 12, he had picked up the Bass guitar. He became a maestro with the strings when he began to play the Electric guitar professionally at age 17.
But music wasn’t just fun for Adam as a bright kid, it was something he did with passion and found solace in. He has an insatiable appetite for music that he joined his first band called Africanaas Band in 2010; a band whose musical thematic expression is rooted and premised on African culture. He has shared stage with several A-list artistes like, Harrysong, Seyi Shay, Terry Apala, Niniola, Soundsultan, Femi Kuti, Orezi, Simi, Praiz, Tuface, Yinka Davis, Timi Dakolo & Aramide among Others.
Adewale Daramola, a graduate of Actuarial Science from University of Lagos, brings his quirky energy to his music, as well as the ability to tug your heart strings with his songs, and his melodies stay in your head long after you’ve heard him. He does songs that belongs to the genre of music called “Afrofusion”. “I’m in love with traditional music which influences my style of music and most of my songs speaks what I have been through,” he explained. His new project titled.
Ayanfe is a body of work that speaks volume of Adam’s robust musical background with rich contents and conscious messages that represents the awesomeness of Adam as an artiste, musician and songwriter., Follow him On his Social Media handles twitter/Instagram  @Adamonstrings
DOWNLOAD MUSIC
By Michael Of Ariyabaze
Labels: MUSIC