Jesus smiles when you call his name during sex – Lutterodt 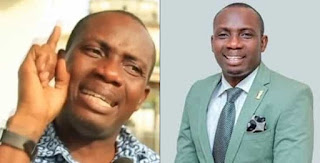 Marriage Counselor George Lutterodt is here again and this time he is claiming that Jesus smiles anytime his name is mentioned during s3x.
According to Counselor Lutterodt, the statement by the founder and leader of Heaven’s Gate Ministries Prophet Kumchacha that it’s a sin for people having s3x to scream the name Jesus and would eventually take the person to hell, is false.
Kumchacha had said;
“Whether you are making the love with your husband or your boyfriend, once you scream the name of Jesus Christ while in the act there is no way you will not go to hell.
God is not his personal property it is the omnipresent God we all know. Read Exodus 21:1-7 it says you should not mention the name of God in vain. So while being romanced if you are mentioning the name like that you commit a big sin. If care is not taken you could be flogged one day by invisible hands while in the act”
While speaking from his base in the United States, the counselor made mention that Jesus rather smiles whenever he hears his name been mentioned when people are enjoying themselves in s3x.
According to him, Kumchacha knows nothing about the topic that was why he passed such statement when asked to share his view on the topic.
Well, this is not the first time these two controversial men have disagreed on a matter. But we keeping our fingers crossed since we are sure Prophet Kumchacha is likely to respond to this.
By Michael Of Ariyabaze
Labels: Entertainment News